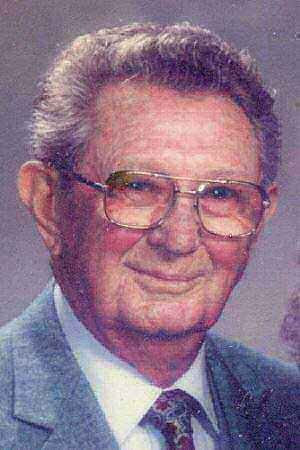 James Edgar Alexander, 85, died in the loving arms of his family in his home on Sunday, February 9, 2003, at 13 Woodley Avenue, Asheville. Mr. Alexander was born in Wilkes County, NC and was a son of the late William Freeland and Nancy Naomi Sebastian Alexander. He was an Army veteran of WW II and was a retired electrician. He was a 50-year member of the International Brotherhood of Electrical Workers, a 44-year member of the Loyal Order of the Moose, and a 39-year member of American Legion Post 781. He was also a member of the Haymeadow Baptist Church and the Buncombe County Veterans Council Memorial Team. Surviving are his wife, Pauline Cutshall Alexander; three daughters, Mary A. Wise and her husband Earl of Candler, Joyce A. Caldwell and her husband Bob of Asheville, and Nancy E. Alexander of the home; a son, Edgar Clyde Alexander and his wife Sandy of Spartanburg, SC; three sisters, Mary Monteith of Cashiers, and Alda Harrold and Lenna Alexander of Hays, NC; eight grandchildren, and twelve great-grandchildren. Funeral services will be at 2:00 pm Wednesday in the chapel of the Western Carolina State Veterans Cemetery with the Rev. Kim Higgins officiating. Military honors will be provided by the Buncombe County Veterans Council Memorial Team and burial will be in the Veterans Cemetery. His family will receive friends from 7 - 9 pm Tuesday at Groce Funeral Home on Patton Avenue. Memorials may be made to the Parkinson’s Disease Foundation, William Black Medical Building, Columbia-Presbyterian Medical Center, 710 West 168th Street, New York, NY 10032-9982.