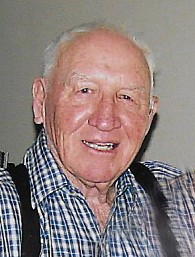 Born in Erwin, TN, Mr. Simmons was the son of the late Nick and Florence Westall Simmons. He was preceded in death by his wife, Alma Hall Simmons, son Robert Edward Simmons, and nine brothers and sisters.

A graduate of Candler High School, Mr. Simmons served in the pacific Theatre with the US Army during WW II. He retired from Norfolk Southern Railroad after working for 33 years as a brakeman and then conductor.

He was an avid outdoorsman and hunter all his life. He could be found fishing, hunting deer, bear, turkey or his beloved grouse at any opportunity.

A graveside service for family and close friends will be conducted by the Revs. Mary Caldwell and Ben Nunley at 10:00 a.m. Tuesday at Pisgah View Memorial Park.

In lieu of flowers, donations may be made to the Daily Bread Program, Hominy Baptist Church, 135 Candler School Road, Candler, NC 28715.