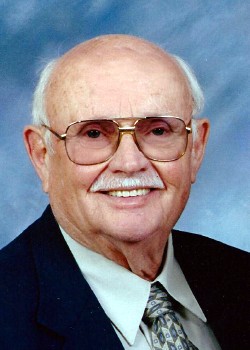 James Fuller Sams, 94, of Candler, died Sunday, May 27, 2012. A native of Yancy Co., he was a son of the late Henry and Mabel Horton Sams. He was also preceded in death by his wife, Belle Sams, and by eight brothers and sisters. Mr. Sams was a Veteran of the U.S. Navy, having served during WWII. He was a business owner in Sylva, NC for numerous years. He was a Mason, and a member of Oak Hill United Methodist Church. Mr. Sams is survived by a daughter, Joan Marie Harmon of Tulsa, OK; a son, Robert Fuller Sams of Waynesville; 3 grandchildren; 3 great-grandchildren; 1 great-great grandchild; and a brother, Mack D. Sams. A memorial graveside service for Mr. Sams will be held Wednesday, May 30, 2012, at Ashelawn Gardens. In lieu of flowers, memorials may be made to the American Cancer Society, 120 Executive Park, Bldg 1, Asheville, NC 28801. Groce Funeral Home on Patton Ave. is assisting the family.