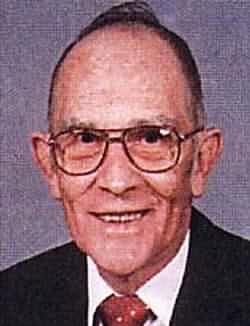 James G. “Jim“ Dover, 77, formerly of Enka, died Friday, March 19, 2004, at a local hospital. A native of Buncombe County, he was a son of the late David F. and Margaret Lyda Dover and was also preceded in death by two brothers, Charlie Dover and Marvin L. Dover and two sisters, Aelene McCarson and Lucille Carol. He attended Asheville-Biltmore College, Wake Forest University and Western Carolina University and was employed by American Enka and BASF in the research department where he retired after 30+ years of service. He was a member of Starnes Cove Baptist Church where he was a deacon and Sunday School teacher. Survivors include five sisters, Kate Golden of Asheville with whom he made his home, Violet Dover of Swannanoa, Margaret Brown, Betty Hall and Roberta Radford, all of Asheville; two brothers, Robert Dover of Candler and Jack Dover of Chesapeake, VA. Jim was a loving and compassionate brother who loved his family and his church family. Many lives were touched by his love of the Lord and he often spoke of going to his heavenly home. Funeral services will be 1:30 pm Sunday at Starnes Cove Baptist Church with the Revs. Charlie Sams and Michael Brown officiating. Burial will follow at Forest Lawn Memorial Park. His family will greet friends from 12:30-1:30 pm at the church. Flowers will be accepted or memorials may be made to Starnes Cove Baptist Church Building Fund, 149 Starnes Cove Road, Asheville, NC 28806.