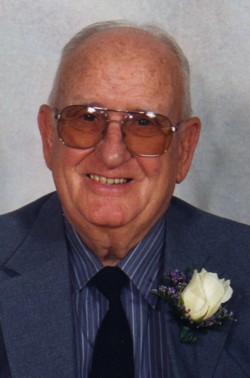 James Herbert Reed, 79, of 23 North Turkey Creek Rd., Leicester, died Sunday, January 20, 2008, at Memorial Campus Mission Hospitals. Mr. Reed was a native of Buncombe County and was a son of the late Carl Edward and Nellie McFalls Reed. He was also preceded in death by his sister, Mildred Johnson, and two brothers, Charles and Edward Reed. Mr. Reed retired after 50 years of trucking. He loved bluegrass gospel music. He also spent a lot of studying and reading the bible, especially Prophecy. He attended Western Chapel United Methodist Church. He loved his family and was most happy when they were around. Mr. Reed is survived by his wife of 59 years, Carlene Wells Reed; children, Brenda McIntosh and husband Lloyd, Terry Reed, and Karla Reed, all of Leicester; and special great-granddaughter, Jordan Kade McIntosh. A funeral service will be at 11:00 a.m. Wednesday in the Patton Avenue chapel of Groce Funeral Home with the Rev. Ed Worley officiating. Interment will follow at the Brick Church Cemetery. His family will receive friends one hour prior to the service at the funeral home. The family requests that in lieu of flowers, memorials be made to the Brick Church Cemetery Fund, c/o Peggy Bennett, P.O. Box 53, Leicester, NC 28748.