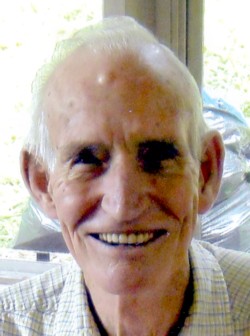 James Howard King, 80, of Solomon Rd., Leicester, went to be with the Lord, and the love of his life, Pauline, on Tuesday, February 9, 2010, at Memorial Campus, Mission Hospitals. A native of Buncombe Co., Mr. King was the son of the late Connie Crawford and James Monroe King. He was also preceded in death by his wife, Pauline Russ King, who died in 2006. Mr. King had retired from Terminex. He was a member of Corinth Baptist Church. He is survived by his children, Linda King Riddle and husband Greg, of Swannanoa, Terry Sluder, of Weaverville, Jerry King and wife Judi, of Leicester, Diane King, of Florida, and Greg King and wife Cristie, of Mills River; step-children, Sylvia Gowing and husband Pete, of Leicester, J.T. Barber and wife Gloria, of Fletcher, and Frankie Woody and husband Joe, of Leicester; sister, Janice Barnes; 11 grandchildren, and 18 great-grandchildren. A funeral service for Mr. King will be at 2:00 p.m. on Thursday at the Groce Funeral Home chapel on Patton Ave. with the Rev. Stan Willett officiating. Interment will follow at Corinth Baptist Church Cemetery. Serving as pallbearers will be Greg Riddle, Joseph Austin, Chris Hyatt, Jeremy King, Ron Gowing, and Donald Burnette. His family will receive friends Wednesday evening from 7:00 to 8:30 p.m. at the funeral home.