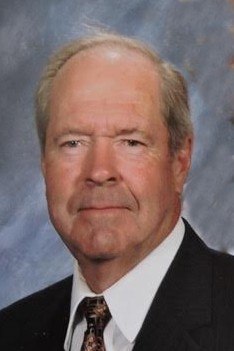 Surrounded at home by his family, James Jarrett Young passed away on January 7, 2017, after an amazingly brave battle with melanoma. He was born May 30, 1938 in Asheville and was a lifelong resident of Buncombe County. Jim served in the Marine Corp from 1956-58. Worked over 40 years as a civil structural engineer at Dave Steel, Asheville Steel, and AMC, Inc. where he retired as co-owner and vice president. He was a member of Central United Methodist Church and for a few years after retirement drove the church van on Sunday mornings. He volunteered as a member of Leicester Volunteer Fire Department, served as president of PTA for Leicester Elementary School, and coached youth basketball and softball when his girls were playing. He enjoyed hunting, camping, fishing, golfing, NASCAR, following NASA space program, spending time at his houseboat on Fontana Lake, water skiing, gardening, traveling, and riding his tractor working the land on his farm. In his later years and especially during his illness he throughly enjoyed watching his backyard birds and chasing the squirrels away. An avid sports fan, his favorites were Carolina basketball, Washington Redskins, and Charlotte Hornets. He loved all dogs and enjoyed visits from his grand dogs. Preceded in death by his oldest daughter Julia Diane Young Manuel and his parents Everett Ray and Margaret Jarrett Young. Survived by his wife, best friend, and companion for 58 years Virginia (Ginger) Creasman Young. His daughters, Debra Young Brown and husband David, Donna Young Kocot and husband Marty, son-in-law John Thomas Manuel. He was Pappy to his six grandchildren, Steven and Johnny Manuel, Melissa and Elizabeth Coleman, Drew and Matt Kocot. His brother David and wife Milly. Many nieces, nephews, cousins and extended family. The family is so grateful for the compassionate loving care from Jim's hospice nurse, Nan and Dr. John Langlois. The weekly visits at home for ten months during his illness were a blessing. You hold a special place in our hearts. In lieu of flowers, donations can be made to the music ministry of Central United Methodist Church, 27 Church Street, Asheville 28801 or West Buncombe Volunteer Fire Department, Inc. 549 Old County Home Road, Asheville 28806 in memoriam of Jim Young. A memorial service will be held at 11:00 am Thursday, January 12, 2017 at Central United Methodist Church with Dr. Robert Blackburn officiating. A reception will follow in the fellowship hall. Groce Funeral Home on Patton Avenue is assisting the family. The online register is available at www.grocefunerlhome.com At other times over the next few days, the family will be at 49 Whispering Woods Drive, Asheville.