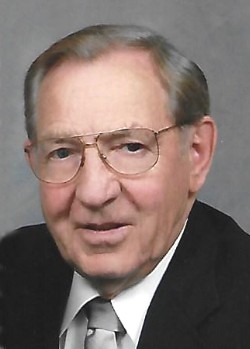 James S. Sluder, 92, passed away peacefully on May 12, 2020, at his residence in Asheville, North Carolina.

A native of Buncombe County, James was the son of the late Dennis and Macie Haney Sluder of Asheville. Brothers Dennis (D.R.) Sluder, Denver Sluder and Gay Sluder; and sisters Marie Stanfield, Betty Waters and Phyllis Black preceded him in death.

James was a graduate of West Buncombe High School and attended Asheville-Biltmore College.

He served in the U.S. Navy during World War II and in the U.S. Army during the Korean conflict. He was co-owner of Town & Country Packing Company on Leicester Highway and Sluder Packing Company in Swannanoa. He was a buyer at Schnieder Electric (Square D Company) before retiring in 1990. He was a member of the Asheville North Seventh-day Adventist Church.

Surviving are his wife and best friend of 62 years, ‘Retha Coffey Sluder, and numerous nieces and nephews.

A memorial service will be held at a later date at Asheville North Seventh-day Adventist Church.