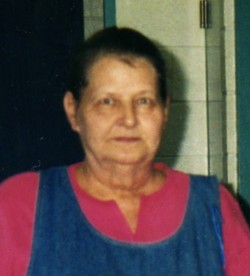 Janet Dorothy North, 68, of Adams Hill Rd., Asheville died on Sunday, November 21, 2010 at her home. A native of Buncombe Co., Ms. North was a daughter of the late John Robert and Amanda Leona Brown North. She was also preceded in death by six of her siblings. Ms. North enjoyed crocheting, and loved gardening and her flowers. She was a member of Erwin Hills Seventh-day Adventist Church. She is survived by her daughters, Tracy Stanley, Vicky Early, and Cathy Garrison; son, John Edward Carney; sister, Betty Warf; brother, Ed North; eleven grandchildren, and seven great-grandchildren. Her family will receive friends from 7:00 to 8:30 p.m. on Wednesday evening at Groce Funeral Home on Patton Ave. In lieu of flowers, donations may be made to the Eblen Foundation, 12 Regent Park Blvd., Asheville, NC 28806.