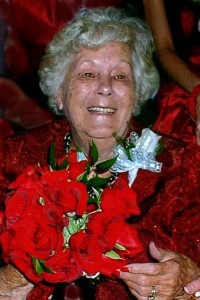 JANIEVE B. HAWKINS Janieve Byrd Hawkins, 94, formerly of Starnes Cove Road, Candler, died peacefully Monday, June 22, 2009, at Pisgah Manor Retirement Center. Mrs. Hawkins was born in Buncombe County and was a daughter of the late M. Anthony and Nola Medford Byrd. She was married to Charles Henry Hawkins, who died in 1993. She formerly worked at American Enka and was an active member at Oak Hill United Methodist Church, where she was a former choir member, Sunday school teacher, and past president of the WMU. She was a member of the Home Demonstration Club and the Friendship Quilting Club. An avid gardener, she especially enjoyed her flowers. She was also an excellent seamstress and cook. Surviving are three daughters, Edith Ray Blankenship, Ann Wait, and Mary Helen Calder, all of Asheville; one son, John Hawkins and his wife, Verba, of Candler; eight grandchildren, twelve great-grandchildren and three great-great-grandchildren. Funeral services will be at 6:00 p.m. Thursday at Oak Hill United Methodist Church with the Rev. D. Wesley Austin officiating. Interment will follow in the church cemetery. The family will receive friends one hour prior to the service at the church. Flowers will be appreciated, or memorials may be made to Oak Hill United Methodist Church, 277 Oak Hill Road, Candler, NC 28715.