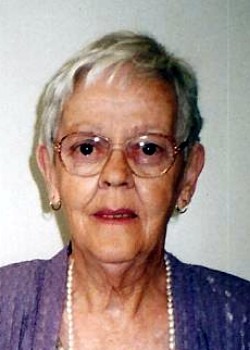 Philippians 2:3-4 "Let nothing be done through strife or vainglory; but in lowliness of mind let each esteem other better than themselves. Look not every man on his own things, but every man also on the things of others." Jean Delores Ingle Bridges, of Alexander, passed away peacefully in her home on June 8, 2013 after a brief illness. A native of Buncombe County, Mrs. Bridges was a daughter of the late Clarence Edgar and Alma Ballard Ingle. She was also preceded in death by her loving husband and the love of her life, Paul Pless Bridges on August 16, 1996. Survivors include her daughter, Paula Bridges of Jonesborough, TN, her sister, Mildred Kitchin (Reeves) of Alpharetta, GA.; nieces, Trudy Woodard (David) of Alpharetta, GA, Greta Stewart (Bob) of Atlanta, GA and her nephew Rev. Phil Kitchin (Myra) of Stone Mountain, GA. Jean was a member of Bethel Baptist Church. She had a tremendous love for the Lord and was active in church her entire life. She grew up under the guidance of her grandfather, William Henry Ballard, who was a Baptist minister. Mrs. Bridges played the piano or organ for over 65 years. She was a blessing and an encouragement to many and always wanted to share her faith with others. Mrs. Bridges retired as manager of Biltmore Farms Credit Union after 30 years of service. Her daughter would like to offer heartfelt thanks to all the individuals who looked after Jean following Paul's death. She would also like to thank Betty Bridges, Jean's sister-in-law and Gayle Williams for their support over the years and her good friend, Bill Bates. Much thanks is also given to her caregivers for the past two months-Sue, Debbie, Julie and Sandra. Mrs. Bridges' family will receive friends on Monday, June 10, 2013 from 6:00-8:00 PM at Groce Funeral Home on Patton Avenue. Funeral services will be at 11:00 AM on Tuesday, June 11, 2013 in the Patton Avenue Chapel of Groce Funeral Home with the Rev. Charles Phillips and others officiating. Burial will follow at Ashelawn Gardens. The family requests that in lieu of flowers, donations be made to the Cemetery Fund at Bethel Baptist Church, 125 Ben Lippen Rd., Asheville, NC 28806.