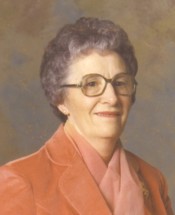 Asheville - Jessie Anderson Johnson, 92, of Jett Court, died Saturday, March 27, 2004 in a local health care center. A native of Swain County, she was the daughter of the late Jim and Lily Conley Anderson and wife of the late Alfred J. Johnson, who died in 1975. She was a member of Beverly Hills Baptist Church and was the former owner of the Meat Service of Asheville. She is survived by her daughter, Mary Ann Owen, and her husband Jesse, of Asheville; three grandchildren, Jesse R. Owen, III of Asheville, Anthony J. Owen of Richmond, VA and Mark A. Owen of Orlando, FL; two great-grandchildren, Kyle and Austin Owen of Orlando; one brother, Claude Rollins of Columbia, SC and several nieces and nephews. Funeral services will be held at 3:00 pm Tuesday in the chapel of Groce Funeral Home on Patton Avenue conducted by the Revs. Tim Lolley and Paul Raybon. Burial will follow at Green Hills Cemetery. Mrs. Johnson’s family will receive friends for one hour prior to the service at the funeral home. Memorials may be made to Beverly Hills Baptist Church Building Fund, 777 Tunnel Road, Asheville, NC 28805.