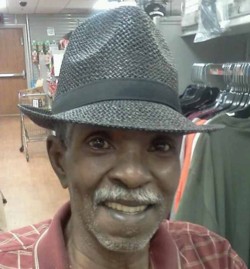 Jimmy Roberts, 64, of Asheville, died following a long, hard battle on Tuesday. February 19, 2013, at the Charles George VA Medical Center. A veteran of the U.S. Marine Corps, he fought like a Marine until the very end against his renal failure, and never complained once. A native of Asheville, Mr. Roberts was a son of the late Loni and Alma Mucklevene Roberts. He was also preceded in death by 11 siblings. His brother, Olvin Roberts, New York, NY, survives him. Mr. Roberts owned and operated Roberts Home Improvements. In addition to his brother, Mr. Roberts is survived by his wife, Sherry Hipps Roberts; son, Jay-lon Qa'id Roberts; step-sons, William Ward and wife Melissa, and Phillip Ward; his "little mo," Dayshia Parker; parents-in-law, Herschell Hipps, Sr., and Judy Lovelace; and four granddaughters. A Celebration of Mr. Roberts's life will be at 4:00 p.m. on Saturday, March 2, 2013, at the Groce Funeral Home chapel on Patton Ave. His family will receive friends for two hours prior to the service.