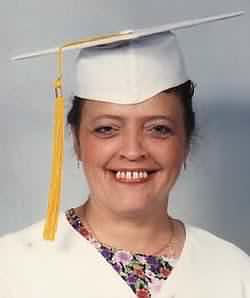 Joann Elliott Laughter, 49, of 715 Reed Street, Asheville, died Friday, September 24, 2004, at her home. Mrs. Laughter was born in Asheville and was a daughter of Georgina Watts Elliott of Asheville and the late Harold Elliott. She was also preceded in death by two sisters Linda Lee and Elaine O’Neil and a brother Phillip Elliott. She was employed as a lab tech at Plastiform and attended Biltmore Church of God. In addition to her mother she is survived by a daughter, Michelle Laughter of Asheville; a son Michael Laughter and his fiancee Denise of Leicester; a granddaughter, (the love of her life) who made her home with Mrs. Laughter, Elizabeth Laughter; her fiance Leroy Haynes of Hendersonville; and three brothers Rev. Robert Elliott and his wife Gail of Candler, Steven Elliott of Salisbury and Owen Elliott of Littleton. A graveside service will be at 3:00 p.m. Sunday at Pisgah United Methodist Church Cemetery with the Revs. Richard Watts and Owen Isaac officiating. Her family will receive friends from 7:00 - 8:30 p.m. Saturday at Groce Funeral Home on Patton Avenue and at other times will be at the home of Rev. Robert Elliott, 78 KenTel Road, Candler. Flowers will be accepted and appreciated or memorials may be made to Mountain Area Hospice, PO Box 25338, Asheville, NC 28813.