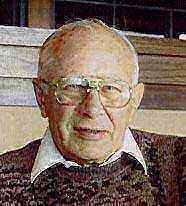 Asheville ~ John Edward “Ed” Lawrence, 86, died Friday, October 1, 2004 following a long period of declining health. He was born in 1918 in Paris, Tennessee. In 1942 he married Ruth Mantyla in Portland, Oregon where he was stationed with the Army Air Corps. He was employed as an accountant and manager at the Ford Motor Company of Detroit for 35 years, retiring in 1980. Survivors include his wife, Ruth Lawrence of Asheville; daughters Marsha Taylor of Ashland, MO, Carol Lawrence and her husband, Peter Caulfield of Asheville and Nancy Lawrence of Chicago, IL. Among his closest relatives, he is survived by his grandson, Geoffrey Taylor of Columbia, MO; sister, Robie Radford and husband, Fritz Radford of White Lake, MI; sister- in-law, Helen DeVault of Asheville and several nieces and nephews. Ed was a dedicated husband and father, an active member first of the Trenton United Methodist Church and, more recently, of the Skyland United Methodist Church. He was an avid golfer for many years. A memorial service will be held at the Skyland United Methodist Church on Friday, October 8, 2004 at 1:00PM with Rev. Arnie Corriher officiating. The family will greet friends at the Crowfields Clubhouse immediately following the service. Private interment will be in the Western Carolina State Veterans Cemetery. Memorials may be made to the Memory Assessment Clinic at Givens Estates, 2360 Sweeten Creek Road, Asheville, NC 28803 or to Skyland United Methodist Church, 1984 Hendersonville Road, Skyland, NC 28776.