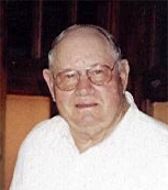 Fairview ~ John Henry Young, 74, of Cane Creek Road, died Monday, August 18, 2003 in an Asheville hospital. A native of Buncombe County, Mr. Young was the son of the late Harley Raymond and Adalee Warren Young. Mr. Young served with the National Guard and worked as a dairy farmer. He served on the Board of Directors of the Farm Bureau for forty years, Tweeds Chapel Cemetery Board of Directors, Board of Directors for Southern States, member of the NC Beef Association and the NC Dairy Association. Mr. Young was a member of Oak Grove Baptist Church. Survivors include his wife, Helen Desma Dotson Young; two sons, Randy Young and his wife, Melissa and Gregg Young and his wife, Kim, all of Fairview; six grandchildren, Kile, Stephen and Joshua Young and Katie, Matthew and Luke Baunack; one sister, Dr. Mary Wyche of Johnson City, TN and one brother, Ferrell Young of Fairview. A funeral service will be conducted Thursday at 11:00 AM in the chapel of Groce Funeral Home at Lake Julian on Long Shoals Road with Revs. Steve Harris and Don Birchfield officiating. Interment will follow in Tweeds Chapel Cemetery. The family will receive friends from 7:00 - 8:30 PM Wednesday at the funeral home. Flowers are appreciated or a donation may be made to one’s favorite charity.