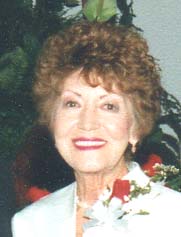 Joyce Williams Ledford, 65, of 25 Rose Bud Lane, Leicester, went home to be with the Lord Friday, May 28, 2004, at her home. Mrs. Ledford was born in Graham Co. and was a daughter of Cecil Williams and the late Lois Parks Williams. She was also preceded in death by a daughter, Pamela Ledford Gahagan who died in 1985. She was a homemaker. In addition to her father, she is survived by her husband Claude Ledford; one daughter, Donna Rhew and her husband Jerry of Leicester; one son Jay Ledford of Mars Hill; three grandchildren, Heather Hudgins, April Owens and Miranda Turbyfill; three great-grandchildren, Dalton Hudgins, Gavin Owens and Kyleigh Hudgins; one sister, Sheila Stewart and her husband Randy of Arden and one brother Cecil Williams, Jr. and his wife Patty of Candler. Funeral services will be at 2:00 p.m. Sunday in the Patton Avenue chapel of Groce Funeral Home with the Rev. Steve Smith officiating. Burial will be at Pisgah View Memorial Park. Her family will receive friends from 6:30 - 8:00 pm. Saturday at the funeral home and request that memorials be made to Mountain Area Hospice, PO Box 25338, Asheville, NC 28813.