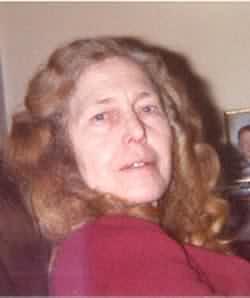 Juanita Davis McElrath, 72, of Asheville, died Saturday, July 27, 2002, after an extended illness at her son’s home at 109 Lainer Lane, Swannanoa. Mrs. McElrath was born in Nantahala and was a daughter of the late James Fred and Lillie Pendergrass Davis. She was also preceded in death by her husband, Charles McElrath in 1982, a son Wayne McElrath and two sisters, Blanche Pendergrass and Eloise Davis. She was retired from Cutler-Hammer. She is survived by a daughter, Frances Goode of Asheville, two sons, Frank McElrath of Swannanoa and David McElrath of Weaverville; four sisters, Lucy White of Andrews, Ethel Meders of Cornelia, GA, Kay Roark of High Point, and Zoea Stillwell of Hayesville; four brothers, Fred Davis, Jr. of Nantahala, Carl Davis of High Point, Clint Davis of Marble, and Frank C. Davis of Swannanoa; seven grandchildren, two great-grandchildren, and several nieces and nephews. Funeral services will be at 11:00 am Tuesday in the Patton Avenue chapel of Groce Funeral Home with the Rev. Robert Gray officiating. Burial will be at Berea Baptist Church Cemetery. Her family will receive friends from 7 - 8:30 pm Monday at the funeral home.