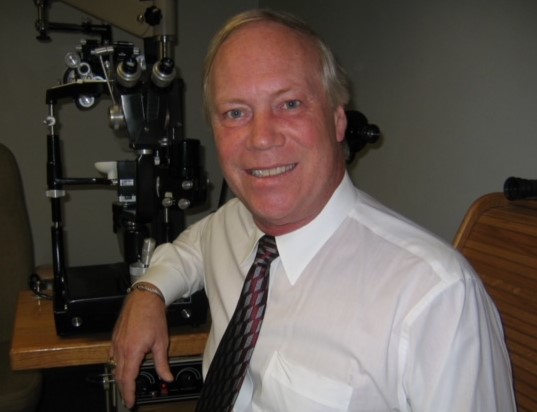 Julian, the second son of the late Olfa and Helen Roberts Crowder, was born May 7, 1950 in Biltmore Hospital. At Enka High School, he was involved in numerous class, social and athletic activities. After high school he attended UNC-Chapel Hill, graduating with a degree in chemistry. In college, Julian enjoyed photography and audio recording. These skills helped him in the production of “Flight”, a multimedia program first presented in the Morehead Planetarium in Chapel Hill and the production later transferred to the auditorium at the Air Force Academy in Colorado Springs, Colorado. Julian also, was a disc jockey in Chapel Hill and was the House Manager of Beta Theta Pi Fraternity.

After college, he attended Southern College of Optometry where he met Paula Herda. They were married at the Washington, Kansas United Methodist Church in 1978. After graduation from SCO, Julian and Paula briefly worked with Dr. Joseph Schandler before opening their own medical optometric practice in Candler. Julian was actively involved with optometric and community affairs. He was president of the Mountain District Optometric Society for several years, was a member of the Executive Council of the North Carolina State Optometric Society for 11 years, serving as trustee, Vice-President and finally President from 1996-1997. He was one of the original members of the National Advisory Board of TLC Laser Centers, a member of the BASF Community Advisory Panel, President of the Enka-Candler Business Association, appeared several times on TV as a member of the WLOS TV Medical Advisory Board and was subject in several “Who’s Who” publications.

Julian had been lucky to have traveled quite extensively, having been in all 50 states and 15 foreign countries. Few of these accomplishments would have been possible without the support and presence of his wife and children.

A funeral service will be held on Tuesday, June 7 at 2:00 pm at Groce Funeral Home at Lake Julian in Arden. The family will receive friends one hour prior to the service at the funeral home from 1:00 to 2:00 pm.