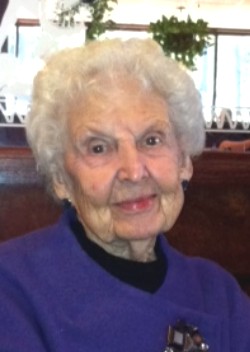 Kathryne Wilson DeLoach, 93, of Bear Creek Road, Malvern Hills, Asheville, died suddenly Thursday, Jan. 10, 2013. Born February 26, 1919 in Canton, she was the daughter of the late Harry W. and Ada Baity Wilson. She was married May 27, 1939 to Henry Oscar DeLoach, who predeceased her on September 3, 1997. Kathryne was also preceded in death by her brother Harry W. Wilson, Jr. and sisters Jean Duckett and Mary Alice Rhodes. She worked at Asheville's Ivey's Department Store for 18 years in the china department. She was a former member of the Rhododendron Garden Club and was a member of Trinity United Methodist Church where she was active with the Sprinkle Bible Class and the Women's Society until her last day. Kathryne DeLoach was a beautiful woman who was so loved by her family for her many gifts of love to them. She was a wonderful mother, an enthusiastic gardener, an excellent cook and an outstanding homemaker. Kathryne was an example of graciousness, loyalty, and service throughout her long life. She is survived by her three children, Harry O. "Bo" DeLoach and his wife Patti of Spartanburg, SC; Connie DeLoach York of Atlanta, GA, and William R. "Bill" DeLoach and wife Lou of Atlanta; six grandchildren, Shannon DeLoach Collins and husband Mark of Charlotte, NC, Meghan DeLoach Young and husband Chris of Bluffton, SC Joseph Earl (Jay) York and wife Erika of Atlanta; Wilson David (Wil) York of Atlanta, Anna Kathryne Sink and husband Matthew of Winston-Salem, NC and William Graham DeLoach of Brevard, NC; and four great-grandchildren, Macall Aileen, Brynn Kathryne, Hudson Jack and Addia Faith Collins, all of Charlotte. The Rev. Rodney H. Hagans Jr. will conduct a memorial service at 2:30 p.m. on Sunday, January 13, 2013 at Trinity United Methodist Church in Asheville. Interment in Green Hills Cemetery will be private. Memorials may be made to Trinity United Methodist Church, 587 Haywood Road, Asheville, NC 28806. Groce Funeral Home on Patton Ave. is assisting the family.