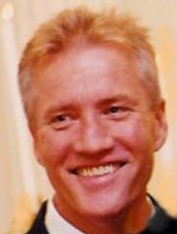 Asheville – Keith W. Stevens, 50, of 703 Brevard Road, died Monday, November 29, 2004, in an Asheville hospital. A native of Wilson, NC, and a former resident of Tampa and Orlando, Florida, he was the son of William H. and Virginia Williams Stevens of Asheville. He had been a resident of Asheville for the past three years and was a Public Sector Risk Manager for The St. Paul Travelers Insurance Co. In addition to his parents, he is survived by his wife, Vicki Perry Stevens; two sons, Russell Stevens, and his wife Janna, of Orlando and Kaley Stevens of Greenville, NC; a sister, Lisa Kretz of Durham and a brother, Ed Stevens of Aiken, SC. A funeral service will be held at 2:00 pm Thursday in the chapel of Groce Funeral home on Patton Avenue conducted by the Rev. Dr. Buddy Corbin. Mr. Stevens’ family will receive friends from 7:00 pm until 8:30 pm Wednesday at the funeral home. Mmeorials may be made to the West Asheville Lions Club, c/o Richard McCurry, 36 Pinewood Place, Asheville, NC 28806.