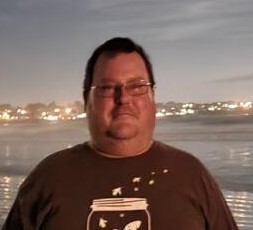 A native of Brockton, MA, he was the son of the late Kenneth and Barbara MacHarrie Logie. Kenny had a lifelong fascination with science fiction. He’d read voraciously from the age of 4 and in social situations/social commentary, he could always be relied upon to provide quotes from the likes of Robert Heinlein, Terry Brooks, Douglas Adams, et al. Kenny was also a devoted Star Trek (all iterations) and Firefly fan. His tastes in music began and ended with heavy metal.

He worked from his teenage years in many aspects of the service industry, maintenance, and the like, a true “jack of all trades”. He was employed for half a dozen years or so as a tow truck driver contracted with AAA of Massachusetts and the anecdotes he shared from that time were sobering.

Kenny moved to NC in 2009 and worked in the engineering department of the Renaissance Hotel Asheville until his untimely passing.

For decades he has been passionate about playing darts. Many nights of the week were spent with members of his dart team, traveling to tournaments in various places, serving as captain of a series of local teams over the years, most recently team G-SNAK. We invite and encourage his many teammates to join him at his visitation and subsequent Celebration of Life to share a final game with him.

In lieu of flowers donations can be made to the Western Carolina Darts Association (WCDA) via https://www.paypal.com/donate/?hosted_button_id=7DZ8HKGMBU2N6 or if wishing to send a check to WCDA, 167 Justice Ridge Road, Candler, NC 28715. Alternatively, donations may be made to the Blue Ridge Humane Society at BlueRidgeHumane.org.