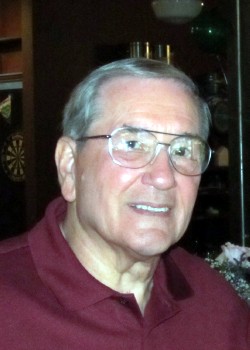 Kenneth Randolph Bowman, Sr., 87 passed away October 26, 2022, after a long debilitating illness. The oldest son of the late Claude Bowman and Della Landers Bowman, he was born and raised in his beloved Greeneville, Tennessee. Ken, known to his Tennessee family as “Duke”, left home right out of high school, recruited by the FBI to work in Washington, DC. He soon met a beautiful young lady from Williamson, WV, Arta Felix, also recruited by the FBI to begin their young careers. Loved blossomed, they soon married, and had two children. Ken was so proud to be a part of the FBI, but he wanted a more stable homelife for his young family and accepted a wonderful opportunity working with Southern Railway. He was soon transferred to Greensboro, NC, then Asheville, NC and finished an illustrious career in Charlotte that spanned 34 years of committed service and loyalty. He formed lifelong friendships with many coworkers and customers across the country, and it was a perfect match for a man who loved people so very much.

Ken guided our family through its hardest times when Arta was stricken early in life with Multiple Sclerosis. He was the family’s rock, being both Mom and Dad to two young kids, the family’s sole provider, and Mom’s full-time caregiver until she passed. Ken found love a second time with Geneva (Jan) and spent 28 years nurturing a blended family with her until he was widowed a second time.

Sports was a huge part of our family, laying a foundation of hard work ethics and commitment, but laced with humor and fun. Ken was an outstanding athlete, playing baseball, football, and basketball throughout high school. He was a lifelong fan of the Los Angeles Dodgers and the Washington Redskins, and every sports team at the University of Tennessee. His passion for sports extended throughout his life, and carried through to his own kids and now two more generations. He coached countless youth in East Asheville sports, including his own son, and coached the Beverly Hills Baptist Church softball team to its first championship. He actively played into his fifties, then faithfully supported his kids’ and grandkids’ teams as their biggest cheerleader. He was the Dad who played with us past dark. He was the Dad who spent treasured time with his kids and taught life lessons through sports. He was the Dad who broke the chains of an absent father, determined to be different for his own kids.

Most of all, Ken loved the Lord and showed that in his daily life. When he was healthy, he served in multiple capacities at Beverly Hills Baptist Church as Deacon and Chair, Sunday School Teacher, Choir and weekly visitation and witnessing. In all he did, he lived his Faith. He always had a smile, and even a glint of mischief. He always saw the positive side of any situation, and shed light in all he did. In spite of significant trials as a young husband and father, and later, a long debilitating illness, his good nature and kindness radiated through those tough times. He will be missed terribly, but we are rejoicing with him as he is now Home at last with his Heavenly Father.

He is survived by his children, Kenneth R. (Randy) Bowman, Jr. (Terri) of Asheville, and Dr. Barbara Bowman-Hensley (Michael) of Black Mountain; grandchildren, Ryan (Miranda) and Joshua; great grandchildren Emily Bowman, Amelia Bowman, Olivia Bowman, Kylie Hensley and Thea Hensley. He is survived by a brother, John Bowman (Amy) of Greeneville, Tennessee and several beloved nieces and nephews. He was preceded in death by his parents Claude Bowman and Della Landers Bowman, and two sisters Savannah Higgins and Mary Calkin.

A celebration of life in honor of Ken’s legacy will be held at 2PM on Saturday, October 29, 2022 at Beverly Hills Baptist Church with Dr. Buddy Corbin officiating. His family will greet friends at the church at 1PM until the service begins at 2PM. His cremains will be shared and interred with both Arta and Jan, at Green Hills and Sky View Cemeteries respectively.

In lieu of flowers, the family requests donations be made to Beverly Hills Baptist Church or Four Seasons Hospice of Hendersonville.