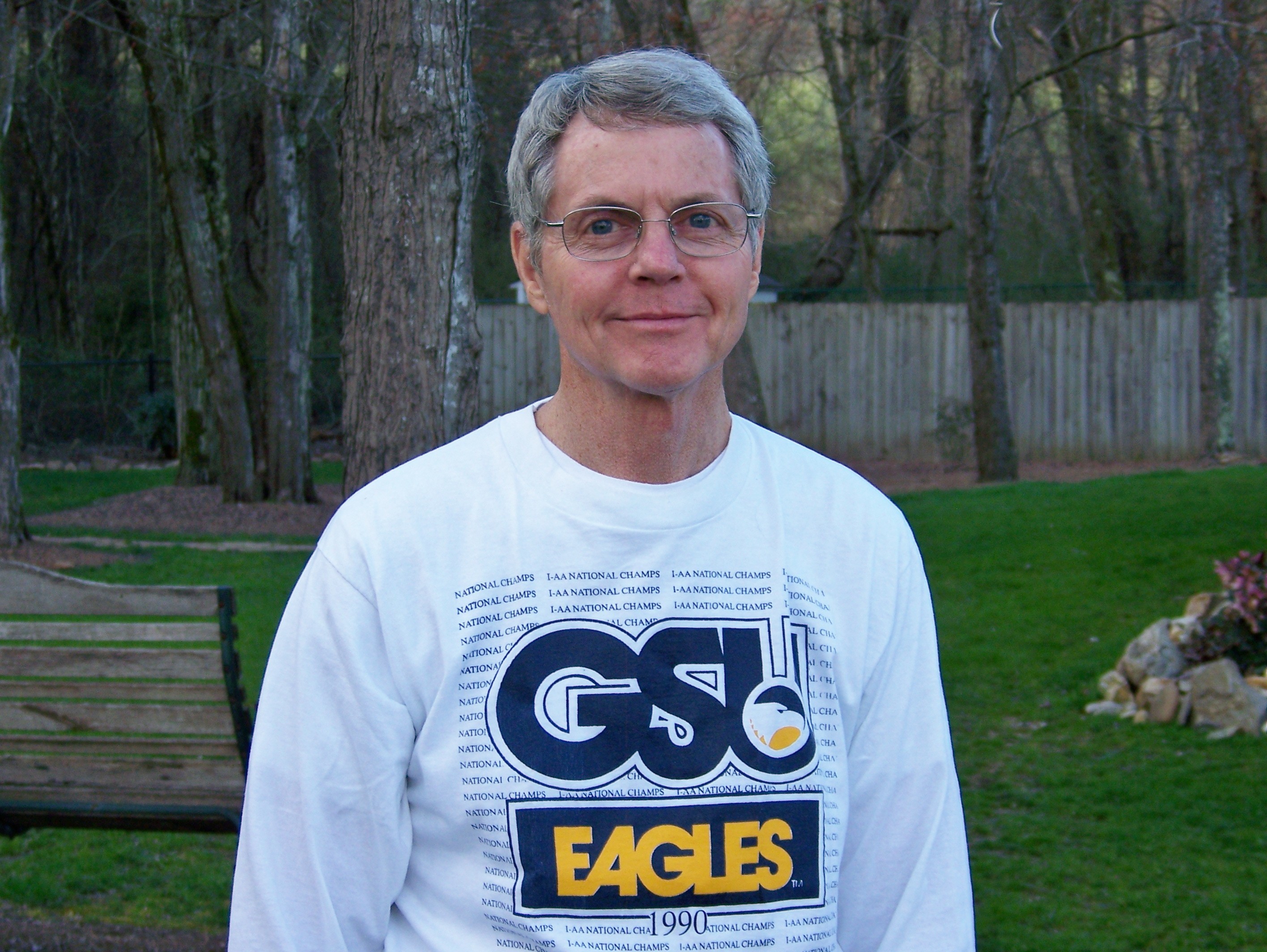 Our earthly love story has ended with the passing of my sweet husband. Larry died quietly at home in my arms on May 25, 2016, after an increasingly difficult, 12-year journey with Frontotemporal Dementia. Larry was the first of twins born to the late Levennia and J.C. Bargeron in Millen, GA. The family moved to Garden City, GA, in 1952, and Larry lived there and in Savannah until he moved to Fletcher, NC in 2011. He graduated from Groves High School and Armstrong State College and proudly served his country for four years in the U.S. Air Force. Larry retired from a career with the GA Dept. of Labor in 2004. His last position was in the Savannah Tax Unit. We met on the Fourth of July, 1976, and have loved each other in the fireworks called marriage since July, 1977. He was an avid fan of the GA Southern Eagles football team and missed only two home games between 1985 and 2011. He played baseball as a youth but soon discovered his true athletic talent was as a bowler. He had a sanctioned 300 game in 1993 and averaged 200 or more for several years. Larry was known for maintaining a beautiful yard, his childlike enjoyment of Christmas, and his large collection of Santas. This sweet man with a goofy sense of humor to whom I was blessed to be married had a special compassion for elderly people. Children and animals were drawn to his gentle and fun-loving nature. He was quick with a smile and usually had a humorous retort. He was always ready to lend a helping hand especially as a member of the Property Committee of the UU Church of Savannah. He loved his family above all else. He is greatly missed by his cherished wife, Bonnie, his twin brother, John Irvin Bargeron and his wife, Kim, several nieces and nephews including his goddaughter, Pamela Bargeron Jones, their children and many cousins. He is also survived by his brother- and sister-in-law, Lew and Jill Lightner of Hendersonville, NC, their daughters, and one new great-niece. In addition to his parents, he was preceded in death by his older brother, Charles Arnold Bargeron. He is also being sadly missed by his beloved Aussie girl, Bailey, his "pretty boy" Amos, and his ball-playing buddy, Phantom. I hope that everyone he met has at least one happy memory of their encounter with Larry. He enjoyed making people smile and loved giving hugs. I was truly blessed that God put me in his path that Sunday in July and allowed me to experience all the happiness that being married to your best friend can bring. Our marriage was a complete partnership, and the love between us will continue through eternity. Larry will be cremated, and no formal service will be held. A Remembrance Gathering for Family and Friends is scheduled for Thursday, June 2, 2016, from 12:00 noon to 2:00 p.m. in the garden of the CarePartners Adult Day Services. Their staff is especially invited in appreciation of the loving care they provided to both Larry and me for the last two years. I also wish to thank CarePartners Hospice for their kindness. Give someone you love a hug, and, if you desire to make a donation in Larry's memory, please consider the CarePartners Adult Day Services (68A Sweeten Creek Rd., Asheville, NC 28803), Memory Care (100 Far Horizons Lane, Asheville, NC 28803), or Keough's Stepping Out Team in the Walk to End Alzheimers http://act.alz.org/site/TR?px=6254425&pg=personal&fr_id=9137&et=giqsON8YnUPgvlh0sHkj9w). Groce Funeral Home at Lake Julian is assisting the family.