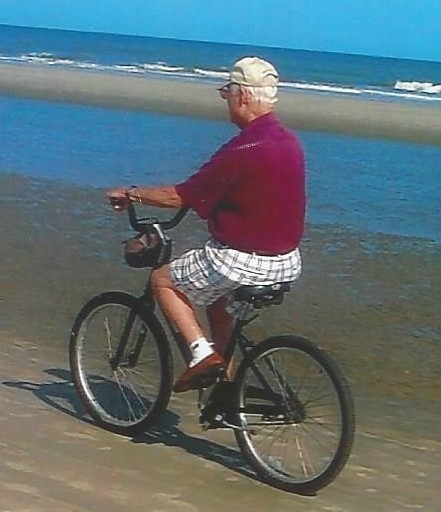 Born in: Evansville, IN
Resided in: Asheville, NC

Lewis Elmer Herron, age 95, passed away at home on June 18th. He was born in Evansville, Indiana on June 10, 1925. He was predeceased by his parents, Lewis Edward and Lora Marie Roberts Herron, and his wife, Josefa Lunsford Herron.

Lewis graduated in 1943 from Washington High School in Washington, Indiana. He served his country in the 100th Bomb Group, 8th Air Force, US Army Air Forces during World War II. He flew 33 missions from Thorpe Abbott, England as a tailgunner on B-17 Bombers. Memories of his service can be read on the 100th Bomb Group website. He was awarded numerous medals including the French Legion of Honor Award in 2016, the European Theatre Medal with three battle stars, the Air Medal with 4 Oak Leaf Clusters, the Polish Army Cross, the Russian Victory Medal, and the Victory in Europe Medal.

After the war he attended Purdue University on the G.I. Bill, graduating in 1950 with a Bachelor of Science Degree in forestry, having been inducted into the Xi Sigma Pi honorary fraternity.

His career in forestry included 22 years as Area Supervisor with Champion Paper which included an assignment as Chief Forester on the Biltmore Estate; 5 years with Ethan Allen Furniture Company; 10 years as Corporate Lumber Buyer with Bruce Hardwood Floors Co. in Dallas, Texas; and 18 years as Consulting Forester for Biltmore Farms Inc.

He was proud to have been a Scoutmaster for 13 years at Lake Junaluska, with six of his scouts becoming Eagle Scouts. He also was a Worshipful Master Western Star #91 in the Masonic Order and was an active member of Trinity Episcopal Church. Lewis was a faithful volunteer at the VA hospital with more than 4,000 volunteer hours.

The family would like to thank Marcia Lunsford, Lew’s hospice nurse, for her compassionate care.

A celebration of his life will be announced at a later date and will be held at Trinity Episcopal Church.

In lieu of flowers, donations may be made to The 100th Bomb Group Foundation; the 8th Air Force Museum in Savannah, Georgia; or Trinity Episcopal Church.