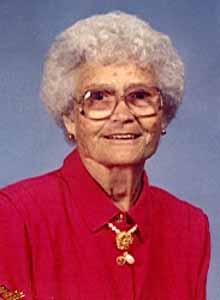 Mrs. Ball was born in Madison County, was a daughter of the late George and Melissa Riddle Norton and was married to Elbert Ball who died in 1980. She was also preceded in death by a daughter, Faye Osborne; a son Russell Ball; a granddaughter, Debbie Roberson and a grandson, Scottie Ball. She was a member of Maple Ridge Baptist Church.

Funeral services will be at 2:00 pm Sunday at Maple Ridge Baptist Church with the Rev. Steve Fox and Lloyd Ponder officiating.

Burial will be at Pisgah View Memorial Park.

Her family will receive friends from 5 - 7 pm Saturday at Groce Funeral Home on Patton Avenue where Mrs. Ball will remain until being placed in the church 30 minutes prior to the service.

Her family wishes to thank the staff of Pisgah Manor Nursing Home for their care and concern.