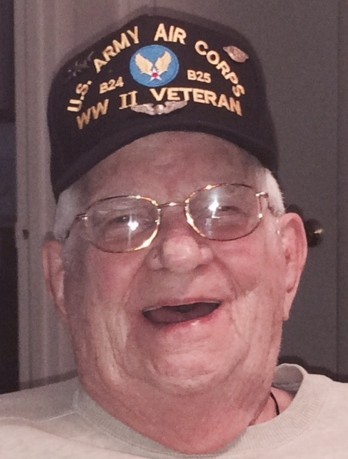 Louis William "Lee" Freund passed away peacefully at The Charles George VA Medical Center in Asheville, North Carolina on Thursday, October 1, 2015 of causes incident to age. Lee was born and raised in Catonsville, a suburb of Baltimore, Maryland; the son of Leigh Whitworth Freund and Helen Delia Kemp. He graduated from Catonsville High School in 1943 and left college at Virginia Polytechnic Institute to proudly serve his country during World War Two as a pilot of B-24 and B-25 bomber aircraft. He married Louise Anne Randall on May 15, 1948. They were later divorced. Lee travelled to, and lived in, many places over the years, and he finally settled in Waynesville, North Carolina, where he became known as a kind and generous neighbor and friend to many people and where he lived the remainder of his life. He is survived by his sister, Laura Feaga, of Missouri City, Texas and his children: Whit (Diane) of Ogden, Utah; Kemp (Jean) of Ellicott City, Maryland; Randee (Greg) Duncan of Plant City, Florida; Terri (Tom) Savage of Upperco, Maryland and John (Kathy) of Fredericksburg, Virginia. He is also survived by 11 grandchildren and seven great-grandchildren. Cremation under the direction of Groce Funeral Home on Tunnel Road, Asheville, North Carolina, and interment will be held at Baltimore National Cemetery, in Baltimore, Maryland on a date that has yet to be determined. The family would like to extend a special thanks to Sandy Arrington, who cared for our dad for many years and Mack Warren, both of whom were by his side when he passed away.