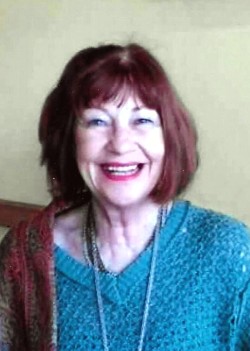 Louise’s first name was Elsie, but she joked that she didn’t like the name because of “Elsie the Cow,” a logo created by the Borden Dairy Company in her childhood. A native of Asheville, she was born on January 31, 1943, to the late Edna Williams and Joe Donald Ingle. She was also preceded in death by her daughter, Sydney Louise Allen, and sisters, Donna Ingle Edwards and Vicky Ingle Kisselburg.

She was a 1961 graduate of James A. Gray High School, in Winston-Salem. Just out of school, she worked in textile research at American Enka. Louise then studied early childhood development and worked as a kindergarten educator at Aycock Elementary School, in West Asheville. In the 1970’s, she ran a shop on Wall Street, in downtown Asheville, called Southern Highland Crafts. Through the shop, she learned the old Appalachian art of cornhusk doll-making from the renowned Mae Ritchie Deschamps. Louise ended her working career at the U.S. Postal Service, where she was a popular rural letter carrier and steward for the West Asheville Post Office for almost 25 years.

Funny, kind, generous, unique and never without her signature nose ring, Louise enjoyed traveling, cooking, shopping, antiques and all things art-related. She had an unconditional love for her children, a compassion for animals, and a strong determination to overcome the many illnesses she faced in life. She will be fondly remembered by all who knew her.

A memorial service celebrating the life of the beautiful Louise will be held at Groce Funeral Home on Patton Avenue at 1:30 p.m. Sunday. She will later be inurned at Green Hills Cemetery.