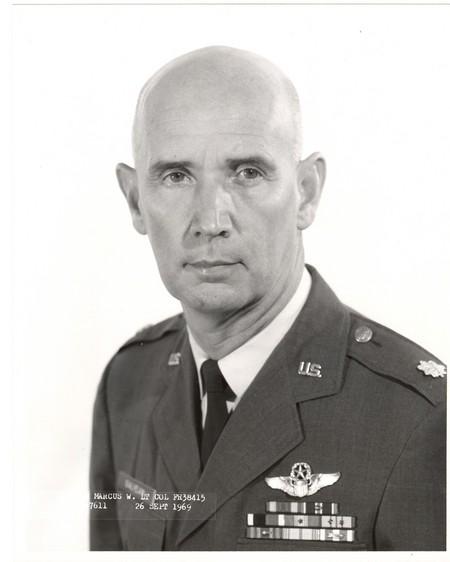 LT. COL (RET.) MARCUS W. GALYEAN Asheville ~ Marcus William Galyean, 89, of Asheville, died Saturday, November 29, 2008 at the St. Joseph Campus of Mission Hospitals. A native of Buncombe County, he was a son of the late Hewitt Galyean and Bettie Merrill Galyean. He had a lifelong interest in electronics and aviation. After joining the Army Air Corps in 1941, he served as a bomber pilot. During 1945-49, he studied electrical engineering at Georgia Tech and received his EE degree, worked at a radio station, and joined the Georgia Air National Guard. In 1950 he returned to active military duty as an Air Force pilot, communications officer, and maintenance squadron commander. Flying many types of aircraft, he logged an entire year "in the air." In 1968 he learned to fly fire rescue helicopters and subsequently served in Thailand and Vietnam. He retired in February 1976 with 29 years of service. After returning to Asheville, he earned multiple Masters Degrees at Western Carolina University and worked at Stencil Engineering as a computer programmer and systems analyst. Marc Galyean became a long distance runner during his tour in Southeast Asia and ran many long distance races, including two marathons in Germany in the early 1970's. He enjoyed working with students in the computer lab a WCU and UNC-Asheville. He was baptized and confirmed in the Episcopal Church and was a faithful member of parishes in California and North Carolina. He is survived his wife of 67 years, Jeanne Simmons Galyean; one daughter, Nancy Margaret Galyean of Reston, VA; two sons, Paul Galyean and his wife, Susan, of San Pedro, CA and Larry Galyean and his wife, Joyce, of Brighton, CO; five grandchildren, Wayne, of CO and Mark, Rick, Clarke and Geraldine, all of CA; three great-grandchildren, Tyler, Griffin and Joseph Paul and one sister, Rebecca Nesbitt, of Irvine, CA. A funeral service will be held at 2:00 PM on Thursday, December 4, 2008 at Calvary Episcopal Church with Father Victor Mansfield officiating. Interment will follow at Calvary Episcopal Churchyard with full military rites to be performed by the Shaw Air Force Base Honor Guard. The family will receive friends from 6:00-8:00 PM on Wednesday, December 3, 2008 at Groce Funeral Home at Lake Julian. The family requests that in lieu of flowers memorials be made to the Eblen Foundation, 12 Regent Park Blvd., Ste. D., Asheville, NC 28806-3704.