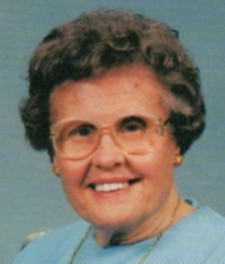 Lucy Ann McKinney, 94, of Asheville, died on Wednesday, April 1, 2009, at Pisgah Manor Health Care Center. A native of Tazewell, TN, Mrs. McKinney was a daughter of the late Moses and Esther McCreary Ball. She was also preceded in death by her husband, Alvin W. "Mack" McKinney, who died in 1979; her sisters, Edith Chadwell, Nannie Lee Higdon, and Emma Brooks; and her brothers, Neil, Bill, Smith, and Jim Ball. Mrs. McKinney was a retired inspector at Hadley's Textile Corp., and was a longtime active member of Grace Baptist Church. She is survived by her daughter, Susan Badger and husband Bill, of Candler; and grandchildren, Sarah Elizabeth Sawyer and husband Michael, and Andrew Mitchell Badger, all of Raleigh. A funeral service for Mrs. McKinney will be at 2:00 p.m. on Saturday in the chapel of Groce Funeral Home on Patton Ave. with the Rev. Dr. L. Wayne Adkisson officiating. Interment will follow at Pisgah View Memorial Park. Her family will receive friends one hour prior to the service at the funeral home.