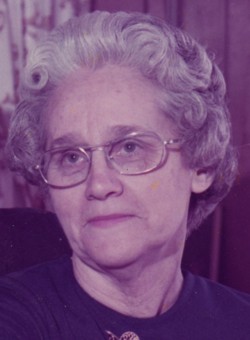 Lucy Burl Shepard Fox, 91, of Old Highway #20, Marshall, died on Friday, March 28, 2008, at the John F. Keever Hospice Solace Center. A native of Madison Co., Mrs. Fox was a daughter of the late Theodore and Riddie Bell Shephard. She was also preceded in death by her husband, Thomas A. Fox, who died in 1995, and by her son, the Rev. Dean Fox. She was a member of Cedar Hill Baptist Church, in Alexander. Mrs. Fox is survived by her daughter, Lula Mae Fox Hawkins and husband Tommy, of Leicester; sons, Troy Fox and wife Ann, of Alexander, William Arlies Fox and wife Jean, of Shelby, Wayne Fox and wife Linda, of Weaverville, Charles Fox and wife Carolyn, of Leicester, Lee Roy Fox and wife Shirley, of Hendersonville, and Tom Fox, Jr., of Newbridge; daughter-in-law, Sharon Fox, of Elloree, SC; 17 grandchildren, 25 great-grandchildren, and two great-great-grandchildren. A funeral service will be at 2:00 p.m. Monday at Cedar Hill Baptist Church with the Revs. Roy McPeters and Nicholas Fox officiating. Interment will follow in the church cemetery. Her grandsons will serve as pallbearers. Her family will receive friends from 7:00 to 8:30 p.m. Sunday at Groce Funeral Home on Patton Ave.