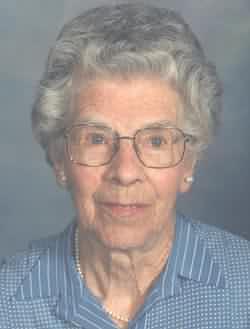 Mabrye Candler Brenton, 92, formerly of Candler, died Monday, January 26, 2004, at the Rickman Center, Richmond Hill, Asheville. Mrs. Brenton was born in Buncombe County and was a daughter of the late Edgar Washington Candler and Mabrye Morgan Candler. She was also preceded in death by her husband, Byron Edward Brenton who died in 1974, two brothers, Coke Candler and Edgar Candler, a sister Lucinda Bell, and a nephew Edgar Candler. She taught for a year at Fontana Dam and for 34 years in Candler and she was a lifelong member of Hominy Baptist Church. She was a former volunteer at the American Red Cross and at St. Joseph Hospital. She is survived by three nieces, Mary Catherine (Kitty) Swayngim, Norine Moore, and Miriam Cole and her husband Marvin. Graveside funeral services will be at 1:00 p.m. Friday at the Samuel Bell Gudger Cemetery on Candler School Road with the Rev. Dr. Joe Yelton officiating. Pallbearers will be Steve, Doug and Josh Swayngim, Jeff Candler, and Jim and Clint Moore. Groce Funeral Home on Patton Avenue is in charge of the arrangements. Memorials may be made to the Hominy Baptist Church Day-Stay Program, 135 Candler School Road, Candler, NC 28715.