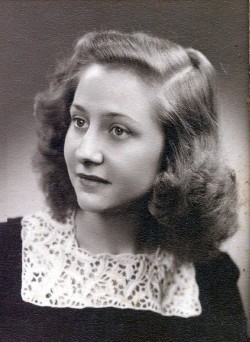 Marjorie Leigh Duranso Russell, 91, went home to be with the Lord on April 25, 2015. Born September 17, 1923 and raised in Winston-Salem, NC, she attended Brevard College, where she met her future husband. Following World War II and college at UNC-Chapel Hill, they married and moved to Candler, NC, where they resided for the rest of their lives. Marjorie was a member of Francis Asbury United Methodist Church, where she was active in service to her church and community. She was preceded in death by her parents, Leo William (Jack) Duranso and Maude Leigh Hyatt Duranso, and her husband of 62 years, John William Russell, Jr. She is survived by her son John William Russell, III, son Walter Gordon Russell (Cathy); grandson John W. Russell, IV (Candie), granddaughter Jennalee R. Sexton (Mike), grandson Zachary R. Russell (Promise), and granddaughter Tiffany F. Burris (David); 7 great-grandsons and 1 great-granddaughter; cousin Shirley White; and many, many friends. Marjorie was a fun and energetic wife, mom and friend, the spark of every gathering, who taught her children to play hard, to work hard, and to give back through service. She was a member and Past President of the Buncombe County Law Wives (later called the Bar Auxiliary), volunteered for over 40 years with the Red Cross, Past President of the Woodside Hills Garden Club, and taught the kindergarten Sunday school class at Francis Asbury UMC for 54 years. Her home and car were filled with song and laughter. She was a flower gardener and cultivator of azaleas and rhododendron, a craftsperson in stained glass, pine cone crafts, knitting, crochet, and quilting. She was a bridge player in several groups. Marjorie enjoyed canning and freezing produce, and loved cooking for her family and the boys who were always traipsing through her kitchen. She always made time for a glass of wine and conversation with family, friends and visitors. She was a lifelong Democrat, and supported the Party at every opportunity. A memorial service will be held at Francis Asbury United Methodist Church, 725 Asbury Road, Candler, NC on Saturday, May 9, 2015, at 3:00 PM. The family will receive friends at the church following the service. A graveside service will follow at the church cemetery. In lieu of flowers, the family requests that memorials be made to Francis Asbury UMC, P.O. Box 67, Candler, NC 28715 (www.faumc.com), or to Memory Care, 100 Far Horizons Ln, Asheville, NC 28803 (www.memorycare.org), or to a charity of one's choice. The family thanks Francis Asbury UMC and Groce Funeral Home in Asheville for their assistance.