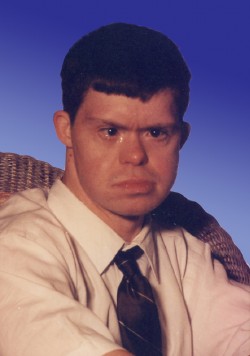 MARK FISHER JONES ASHEVILLE - Mark Fisher Jones was born on March 31, 1958 at Memorial Mission Hospital in Asheville, NC to Allmond H. Jones, Jr. and Theresa Rogers Jones Aiken. Mark lived at home until he was placed into the loving care of the Sister Patrice and the Sisters of Mercy at Holy Angels' Nursery in Belmont, NC for a few years. The bulk of Mark's life was spent at Western Carolina Center in Morganton where Mark thrived for over 30 years. Mark received care from Judy Ray for a few years in Leicester, NC in her home, after which time Mark was admitted to Black Mountain Neuro-Medical Treatment Center, where he received the very best of care. Mark is survived by his brothers, Allmond H. Jones, III of Charlotte, and Roger L. Jones of Fletcher, and a sister Janis J. Pulley, of Durham, along with two nieces, Amanda J. Barnard of Mt. Airy and Samantha L. Jones of Asheville. Mark passed away after a short illness on Friday, May 20 at Black Mountain Center. No memorial services are planned, and Mark will be interred at Riverside Cemetery in Asheville. A delight and blessing to all who had the privilege to know and care for him, Mark constantly defied the odds of life expectancy by battling back time and again from bouts of pneumonia for over a decade, clearly demonstrating that he loved his life, loved his people and wasn't ready to leave his community. Mark enjoyed country music, chocolate milk, coffee and cream, and allowing his fellow residents to precede him on any activities or outings, making sure he was the last to board the vehicle. In lieu of flowers, the family would encourage donations to Black Mountain Neuro-Medical Center, 932 Old US 70, Black Mountain, NC 28711, in Mark's memory.