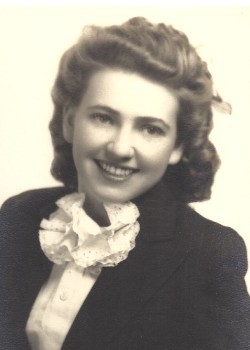 Martha Miller Maltry, 92, of Candler, died Sunday, November 20, 2016. A native of Buncombe County, she was a daughter of the late Flonzie M. and Stella Todd "Mosie" Miller. Mrs. Maltry's husband of 67 years, John M. Maltry, Jr., died in 2013, and she was also preceded in death by a sister, Sarah Dunn. She was a member of the 1939 Hall Fletcher May Day Court and was a 1942 graduate of Lee Edwards High School. She traveled the world with her husband, a career Army man and former Provost Marshall at Nuremburg, Germany. She served as president of the Officer's Wives Club in Augsburg, Germany, in 1952. She was always active in Sunday school ministry and was Director of the nursery at Fort Stewart, GA in the 1960's. She was a member of Crossroads Assembly in Asheville and sang in the Gospel Tabernacle and the Crossroads Assembly choirs as well as being a member of the Christian Women's Club. Mrs. Maltry enjoyed pottery, but her passion was in handcrafting dolls, an avocation which earned her several blue ribbons. She was co-founder of the Land of the Sky Doll Club and served as president of the Enka High School PTA in 1970. Her family include daughters, Rebecca McKinney and Rachel Derriso (Tom); son, John Maltry (Maria); six grandchildren, twelve great-grandchildren; one great-great-granddaughter, Ava Grace Elmore, and sisters, Mary Robinson and Dorothy Roberson. Funeral services will be at 11:00 a.m. Wednesday in the Patton Avenue chapel of Groce Funeral Home with Pastor Michael Brown and Dr. Dan Robinson officiating. Burial will follow at Piney Mountain United Methodist Church Cemetery in Candler. Pallbearers will be Steve Derriso, Tony Derriso, Chad Robertson, Eric Evans, Tyler McKinney and Spencer McKinney. Her family will receive friends at the funeral home Wednesday morning one hour prior to the service. Memorials may be made to Crossroads Assembly, 20 S. Bear Creek Road, Asheville, NC 28806.