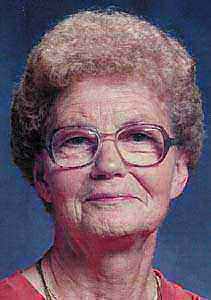 Mary Ann Briggs Johnson, 76, of 8 Douglas Place, Asheville, died Saturday, September 24, 2005, at Mission Hospitals. A native of Polk County, she lived most of her life in Buncombe County and was a daughter of the late Carl and Arnette Byrd Briggs. She was also preceded in death by her husband, Richard Johnson, who died in 1980. She worked as a CNA in private homes and was a member of Harvest Time Assembly of God. Devoted to her family, she is survived by two daughters, Anna Player and her husband Phil of Asheville and Elizabeth Tweed and her husband Alan of Asheville; a sister, Ida Lee McKinney and her husband Boyd of Mars Hill; a brother, Harold Briggs and his wife Barbara of Asheville; four grandchildren, Paula, Alex, Jon and Stephanie; two great-grandchildren, Katlyn and Brianna and several nieces and nephews. Funeral services will be 2:00 pm Tuesday at Harvest Time Assembly of God with the Rev. Darrell McClaren and Mr. Alex Player officiating. Burial will follow at Woodlawn Cemetery. Her family will receive friends from 7:00-8:30 pm Monday at Groce Funeral Home on Patton Avenue. Flowers are accepted or memorials may be made to Harvest Time Assembly of God, 225 Summit Street, Asheville, NC 28803.