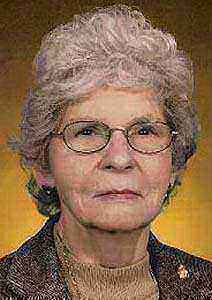 Mary Haynes Lance, 84, of 107 Brooks Cove Rd., Candler, passed away in her sleep Thursday, November 30, 2006. Mary was a daughter of the late James F. and Lester May Williams, of Asheville, and was a lifelong resident of Asheville and Candler. She was also preceded in death by her husband, E. Clay Lance, who died in 2005. She retired from Singer Sewing Machine Co. in 1980. She attended Liberty Baptist Church for 63 years. Mary is survived by her son Jerry Lance and wife Betty Jean, of Charlotte; sisters, Bernice Lance, of Franklin, VA, and Edith Moore, of Leicester; three grandchildren, Denise Bordeaux and husband John, of Delco, NC, Paul Lance, of Candler, and Brad Lance and wife Ashley, of Charlotte; three great-grandchildren, Clay, Casey, and Cori Bordeaux, all of Delco; and nieces, nephews, and friends too numerous to mention. The family would also like to acknowledge her angels who took care of her for the past years. A funeral service will be at 5:00 p.m. Saturday in the Patton Avenue chapel of Groce Funeral Home with the Rev. Gene King officiating. Interment will be at 1:30 p.m. Sunday at Calvary Episcopal Churchyard in Fletcher. Her family will receive friends at the funeral home immediately following the service, from approximately 5:30 to 7:30 p.m. In lieu of flowers, memorials may be made to Liberty Baptist Church, 875 Monte Vista Rd., Candler, NC, 28715.