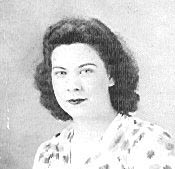 Mills River ~ Mary Lee Greene Keith, 82, died peacefully after a long illness on Wednesday, September 15, 2004, at The Elizabeth House in Hendersonville. Mrs. Keith was a native of Buncombe County and was the daughter of the late Ila and Ovia Penland Greene. She was preceded in death by her beloved husband, Floyd Byron Keith, who died in 1965, her precious son, Daniel Byron Keith in 1954, and seven brothers and sisters. She was dearly loved as sister, wife, other and grandmother. Survivors include two sons, Bob Keith of Mountain Home and Tommy Keith of Mills River; a daughter, Kathy Keith of Mills River and a son-in-law, Robert Hemsath of Rutherfordton. Also surviving are three sisters, Blanche "Bobbie" Bryson of Mills River, Hazel Shepherd and Ruth Ballard of Hendersonville; two grandchildren, Joshua Keith Hemsath and Ashley Laurel Hemsath; a special great niece, Alicia Ballard and many nieces and nephews. Funeral services will be held 3:00 PM Friday in the chapel of Groce Funeral Home at Lake Julian on Long Shoals Road with Hospice Chaplain Joyce Hallberg officiating. Burial will follow in Green Hills Cemetery. The family will receive friends 30 minutes prior to service at the funeral home. The family wishes to extend their heartfelt appreciation to Janet Bull, MD, Dee Hulihan, NP and the staff of angels at The Elizabeth House for their extraordinary care. May God bless and keep you always. In lieu of flowers, memorials may be made to Four Seasons Hospice and Palliative Care, PO Box 2395, Hendersonville, NC 28793.