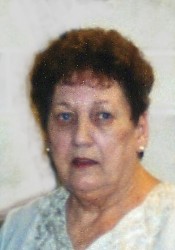 Mary Louise Barnes Meadows, 67, of 11 Sam Hill Road, Leicester, went to be with the Lord on Saturday, December 11, 2004, at St. Joseph Hospital. Mrs. Meadows was born in Madison County and was a daughter of the late Columbus Baxter and Elsie Brown Barnes. She was also preceded in death by a grandson Tyler Meadows, a sister Bernice Frisbee, and a son-in-law Rex Frisbee. She was a homemaker and a member of Happy Valley Baptist Church. She was a loving wife, mother and grandmother and is survived by her husband of 48 years, Owen Conley Meadows; a daughter Sherry Frisbee of Leicester; three sons and daughters-in-law, Dwight A. and Kim Meadows, Randy and Kim Meadows and Mike and Melody Meadows, all of Leicester; grandchildren, Amanda and Jonathan Meadows, Ashlee Ross, Robert, Jacob and Beth Denson, Courtney Frisbee, Autumn Meadows, Cody and Trace Heatherly and Brooke and Chloe Meadows; one great-grandson Trevor Ross, and one sister Melba Burke of Asheville. The funeral service will be at 2:00 p.m. Monday in the Patton Avenue chapel of Groce Funeral Home with the Revs. Perry Burke and Terry Burke officiating. Burial will be at Bell United Methodist Church Cemetery. Memorials may be made to Happy Valley Baptist Church, 28 Happy Valley Road, Asheville, NC 28806.