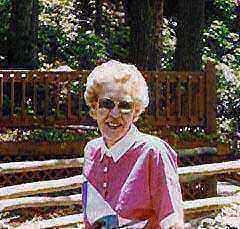 Asheville ~ Mary Williams Rogers, 74, of 401 Turtle Creek Drive, died Thursday, March 18, 2004 at her residence. A native of Buncombe County, Mrs. Rogers was a daughter of the late Furman and Kezzie Lance Williams and wife of the late Billy Wilbur Rogers, who died in 2003. Mrs. Rogers was retired from American Enka following 44 years of service and a member of Long Shoals Baptist Church. Survivors include a daughter, Ramona Stevens and her husband, Lewis, of Arden; a son, Wayne Rogers and his wife, Laura of Fletcher; 5 grandchildren, Ronda McNeill, Renee Mercado, Andrea Rogers, Christa Noon and Dawn Stevens; 3 great-grandchildren, Rebekah and Elias Mercado and Beth Ann Noon and a sister, Beatrice Dunlap. A funeral service will be conducted Saturday at 11:00 AM in the chapel of Groce Funeral Home at Lake Julian on Long Shoals Road with Rev. Roger Rearden officiating. Interment will immediately follow in Pisgah View Memorial Park. The family will receive friends one hour prior to the funeral service at the funeral home. Memorials may be made to the American Cancer Society, 120 Executive Park, Building 1, Asheville, NC 28801.