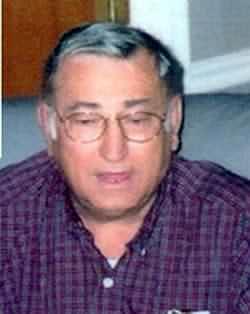 Maurice Bridges, 67, of 165 Clover Drive, Fletcher, died Monday, October 7, 2002, at his home. Mr. Bridges was a native of Buncombe County and was a son of the late Herman and Zinnie Sluder Bridges. He was also preceded in death by his wife, Peggy Worley Bridges. He was a retired tractor and farm equipment salesman. Surviving are three daughters, Kathy Scott and her husband Chris of Leicester, Debbie Watkins and her husband Bruce of Arden and Ann Rhew of Asheville; one son, Terry Bridges and his wife Becky of Campobello, SC; two sisters, Margaret Rhymer of Leicester and Colleen Riddle of Michigan; a brother, Ronnie Bridges of Alexander; seven grandchildren and one great-grandchild. Funeral services will be 2:00 pm Thursday in the Patton Avenue chapel of Groce Funeral home with the Rev. Charles Phillips officiating. Burial will be at Pisgah View Memorial Park. His family will receive friends from 7 - 8:30 pm Wednesday at the funeral home and at other times will be at the residence, 165 Clover Drive, Fletcher. Memorials may be made to Mountain Area Hospice, PO Box 25338, Asheville, NC 28813.