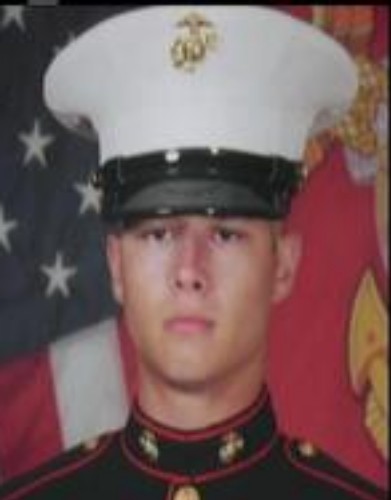 Cpl. Michael Joseph Dutcher, 22, was killed in action Thursday, September 15, 2011, in Helmond Province, Afghanistan. Cpl. Dutcher was born in Asheville and was a 2007 graduate of Asheville High School where he was a member of the marching band and a member of the Marine Corps JROTC. At the time of his death, he was a member of the 1st Battalion, 5th Marines, stationed in Camp Pendleton, CA. He was the loving son of Teresa Gentry Dutcher and twin brother of David Timothy Dutcher. Cpl. Dutcher has now joined his father, David Dutcher, who died in 2005. He was also preceded in death by grandparents Harold Gentry and Paul and Betty Dutcher. In addition, he is survived by his grandmother, Frances Gentry; aunts, Marsha Gentry, Paula Glosup, Sherry Rollins and Patty Jackson; uncles, Randy and Les Dutcher, several nieces and nephews, and by his fiancée, Rachel Adams. A funeral service is scheduled for 12:00 noon Friday at Trinity Baptist Church with the Rev. Dr. Ralph Sexton and the Revs. Allen Rash and Dwight Parrish officiating. Full military honors will follow at the Western Carolina State Veterans Cemetery. The family will receive friends from 6:00 to 8:00 p.m. Thursday at Trinity Baptist Church. In lieu of flowers, memorials may be made to the Wounded Warrior Project, 4899 Belfort Road, Jacksonville, FL 322356.