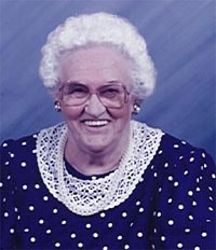 She was a native of Yancey County and was the daughter of the late W.S. Briggs and Winnie Higgins Briggs and wife of the late David Raymond Young, who died in 1960. She was also preceded in death by two brothers, Theodore and George Briggs and two sisters, Thelma Briggs Souther and Bertsie Briggs Dotson.

Her funeral service will be held at 11:00 AM, Thursday, at Oak Grove Baptist Church in Fletcher, of which she was a member, with the Rev. Dr. J. Leland Mullinax, and Rev. John Huntley and Rev. Fred Wardrup officiating. Burial will follow at Tweed’s Chapel Cemetery.

Her family will receive friends from 7:00 until 8:30 PM Wednesday at Groce Funeral Home at Lake Julian, where Mrs. Young will remain until being placed in the church 30 minutes prior to the service.