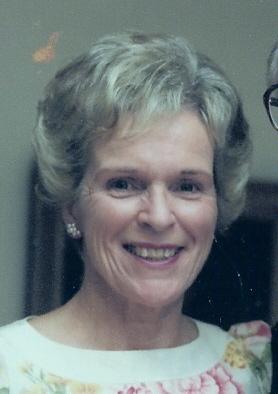 Asheville ~ Nancy Mangam Clark, 83, died Sunday, September 13, in Asheville, North Carolina. A memorial service to celebrate her life will be held at 4:00 pm on Wednesday, September 16 at St. Giles Chapel, 26 Sheffield Circle, located on the grounds of Deerfield Episcopal Retirement Community in Asheville. The family will receive friends at a reception immediately following the service. Born in Oyster, Bay, NY on February 11, 1926, Mrs. Clark was a summa cum laude graduate of the State University of New York in Cortland and was an elementary school teacher. She lived in Syracuse, NY for 40 years where she was active in the Junior League, Onondaga Golf & Country Club, the Syracuse Garden Club, and St. David's Episcopal Church. Mrs. Clark was a resident of Deerfield for 10 years. A devout Episcopalian, she served on the Altar Guild and was recently president of the Daughters of the King at St. Giles Chapel. She is survived by her beloved husband of 62 years, Robert T. Clark; three daughters including Catherine Clark Gibbons (Robert) of Syracuse, NY, Gay Clark Jennings (Albert) of Sagamore Hills, OH, and Carla Clark Liberatore (David) of Cary, NC; and four grandchildren Lee, Sam, Louis and Robert. Memorial contributions in her memory may be made to St. Giles Chapel, 26 Sheffield Circle, Asheville, NC 28803.