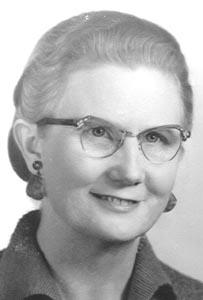 Mrs. Duckett was born in Buncombe County and was a daughter of the late Manning H. and Aleatha Hice Lance. She was also preceded in death by her husband, Arthur Lee Duckett, her daughter-in-law, Mary Duckett, in 1999, and by five brothers, Sylvan, Arthur, Roy, Eugene and Paris Lance.

She had formerly worked at Nettie Perkinson’s and the Bonnie Harris Shop and retired after 23 years from the alteration department of John Carroll. She sang with the Duckett Trio and also traveled and sang with the Carolina Quartet. She was a member of Oak Hill United Methodist Church.

Surviving are one daughter, Wylladene Nelson and her husband Malcolm of Chicago; two sons, Don Duckett of Candler and Forest Duckett and his wife Lucille of Travelers Rest, SC; five grandchildren and two great-grandchildren.

Funeral services will be at 3:30 pm Friday in the Patton Avenue chapel of Groce Funeral Home with the Revs. Enoch Ball, Jr. and Kimberly S. Higgins officiating. Burial will be at Oak Hill United Methodist Church Cemetery.

Her family will receive friends one hour prior to the service at the funeral home.

Memorials may be made to the Oak Hill United Methodist Church Cemetery Fund.