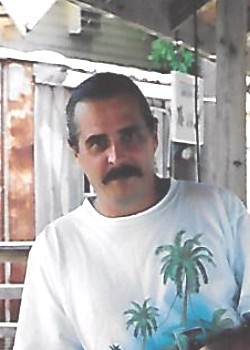 Oswald Carlos “Kutchie” Pelaez, Jr., 68, set sail for Paradise on Sunday, April 3, 2022, in his family home, surrounded by loved ones.

Father, Husband, Warrior, Poet- Kutchie Pelaez made his grand debut on July 1, 1953, in Asheville to the late Oswald Carlos Pelaez, Sr. and Polly Riddle Pelaez. Kutchie was a graduate of Asheville High School and he, alongside his wife and family, owned and operated various enterprises throughout his lifetime, most notably Kutchie’s Key West Bar and Grill in Arden.

Kutch was a true renaissance man- an artist with not only brush and pen but a truly gifted sculptor and celebrated chef, providing “The Place To Be” to his community for over three decades. Among his many passions and interests in his fleeting time with us-including being a lifetime member of Calvary Baptist Church- he was a true lover of animals and the great outdoors; a man of the mountains but also the beaches.

Kutch left this world as he lived it- bravely and with a tenacity that we are not soon likely to see again. He is celebrated in life by his wife, Anita Heaton Pelaez; sons, “The Three Amigos”- Oswald Carlos III, Santino Nicholas, and Joseph Pacino; granddaughters, (his heartbeats) Cordelia and Elena Pelaez; brothers, Pete Pelaez (Jan) and Joseph Horecny (Terri); sister, Patricia Burke (Curtis); along with many beloved nieces and nephews. He is also preceded in death by his sister, Judie Davis.