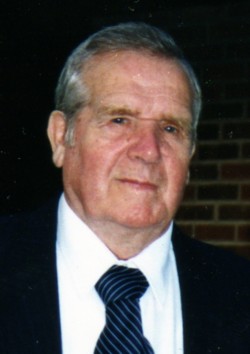 Paul William Banks, 85, of 56 Sunnyview Terrace, died Friday, April 2, 2010. Mr. Banks was born in Greeneville, TN, but spent most of his life in Buncombe County. He was a son of the late Odis William Banks and Martha Frances Burnette Banks. He was retired as manager of J.M. Westall Lumber Company where he worked more than 50 years. He was a charter member of the West Buncombe VFD where he served for more than 50 years, and was president of the Board of Directors at the time of his death. He was a member of New Hope Missionary Baptist Church. He is survived by his wife of more than 62 years, Mildred Gibson Banks; two daughters, Gloria Brank and her husband, Mark, of Asheville and Cathy Davidson and her husband, Harold, of Alexander; a son, Ronald David Banks of Asheville; two granddaughters, Christy Scruggs and her husband, Stan, of Monroe, and Angela Davidson of Alexander and her fiancé, Dustin Shiflet of Brevard; three great-grandsons, Hampton, Bolton and Larson Scruggs; four sisters, Josephine Hollifield of Asheville, Elsie Shook of Alexander, and Wilma Radcliff and Eloise Nelon of Asheville; special friends, his sister-in-law and brother-in-law, Ruth and George Shipman, and several nieces and nephews. Funeral services will be at 2:00 p.m. Monday in the Patton Avenue chapel of Groce Funeral home with the Revs. Lawrence Smith and Bobby Gibson officiating. Interment will follow at New Liberty Baptist Church Cemetery. The West Buncombe Volunteer Fire Department will coordinate an honor guard and full fire department honors. The family will receive friends from 7:00 to 9:00 p.m. Sunday at the funeral home and at other times will be at the residence. Flowers will be appreciated or memorials may be made to New Hope Missionary Baptist Church, c/o Harold Davidson, 464 Old Highway 20, Alexander, NC 28701.