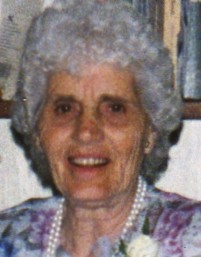 Pauline Black Reeves, 80, of 687 Sandy Mush Rd., Leicester, died Monday, March 19, 2007, at St. Joseph?s Campus Mission Hospitals. A native of Buncombe Co., she was a daughter of the late Leslie and Verna Rogers Black. She was also preceded in death by her husband, Dewey Filmore Reeves, who died in 1961. She was a loving mother, and grandmother, and was loved by many in her community. Mrs. Reeves was a member of Little Sandy United Methodist Church. Mrs. Reeves is survived by her daughter, Judy Reeves, of Leicester; sons, Douglas, Rickey and wife Wilma, Jerry and wife Vicky, Chris, and Keith, all of Leicester; brother, Harold Black and wife Pearl, of Leicester; 12 grandchildren, and 16 great-grandchildren. A funeral service will be at 11:00 a.m. Wednesday at Little Sandy United Methodist Church with the Rev. Dennis Brown and Steve Robinson officiating. Interment will follow in the church cemetery. Her family will receive friends at the church one hour prior to the service.