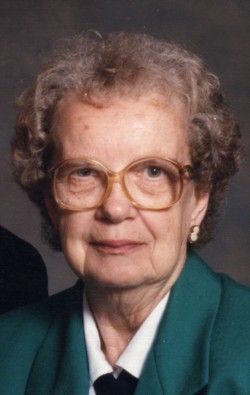 Pauline Nesbitt Latham, 86, of Fairview, beloved mother and grandmother, passed away on Sunday, October 28, 2007 at Flesher’s Fairview Healthcare Center. Our Heavenly Father took Pauline to heaven to live eternally with Him and to join her beloved husband of sixty-four years. She was born on March 8, 1921, daughter of Andy Roscoe and Callie Lee Nesbitt. Pauline grew up in Fairview, and lived much of her life in the area. She was a member of Nesbitt’s Chapel Methodist Church in Fairview. She retired after many years of service at Taylor Instruments. A faithful wife and mother, Pauline was a beautiful example of the Proverbs 31 woman, whose “children arise and call her blessed; her husband also, and he praises her.” Her life touched those around her in more ways than could be mentioned, putting others before herself with an example that her children and grandchildren still strive to emulate. In addition to her parents and husband Walter “Fred” Latham, who passed away in June of 2006, Pauline was preceded in death by her only son, Michael Latham, as well as three brothers, Floyd, Andy, and Tom Nesbitt and four sisters, Catherine Lytle, Betty LaRoche, Sara Benson, and Mary Sluder. She is survived by two daughters, Maxine Ownbey & husband Arthur, and Marrian Lyda & husband Paul, all from Fairview, as well as her daughter-in-law, Nancy Latham of Black Mountain. She is also survived by seven grandchildren and spouses, Mark Ownbey of Fairview, Keith (& Michelle) Ownbey of Fairview, Teresa (& Jeff) Brooks of Radford, VA, Glenn (& Tracy) Latham of Old Fort, Connie (& Don) Busey of Concord, Amy (& David) Roland of Charlotte, and Beth (& John) Blessing of Greenville, SC; and twelve great-grandchildren. She is also survived by five sisters and three brothers; Nanny Randolph, Louise Bishop, Ruby Swink, Lettie Gentle, Barbara Banks, David Nesbitt, Bill Nesbitt, and Sam Nesbitt. The family would like to express their thanks to the staff of Flesher’s Fairview Healthcare Center for the compassionate care given to both Fred and Pauline during their final days. A funeral service is scheduled for 6:00 p.m. Tuesday in the Lake Julian Chapel of Groce Funeral Home, 72 Long Shoals Road, with the Revs. Michael Harrell, Jr. and Lawrence Ownbey officiating. Private interment will be Wednesday at Nesbitt’s Chapel United Methodist Church Cemetery. The family will receive friends at the funeral home Tuesday evening immediately following the service.