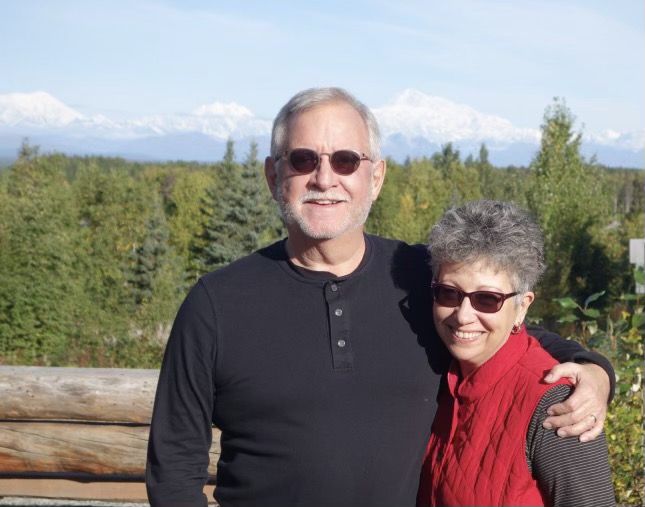 Peter Landis, a long-time New York City television news producer known for his sharp attention to detail, accuracy and fairness, and his penchant for wearing Hawaiian shirts in the newsrooms at WCBS-TV and NY1, where he worked for decades, died unexpectedly in his adopted home of Asheville, North Carolina on Thursday, May 20. He was 72.

His family said he suffered a severe stroke during what was expected to be minor back surgery and never regained consciousness.

Born in 1949 to John and Maria Landis, German immigrants who reared him in the Flushing neighborhood of Queens, Peter was a proud graduate of Regis High School and Holy Cross College.

He demonstrated an interest in broadcast news at the college radio station, where he and fellow student Norman Cohen ran a Sunday show. “We … did all the engineering, color, news and sports in between the music,” recalled Rabbi Cohen. “In those days there was an AP (Associated Press) wire machine that produced long yellow sheets of printed text which you would tear off just before news time. Pete was destined for broadcasting in one way or another. He was so comfortable in the radio studio…. He was an exemplar in every way. Some of my best memories of my college days were the times I spent with Pete.”

While at Holy Cross, Peter was also integral in publishing a daily newssheet on protests against the Vietnam War, which kept students aware of events across the country.

After college, Peter worked at the Catholic Free Press in Worcester, Massachusetts. Encouraged by the managing editor, Owen Murphy, Peter applied and was accepted to the Columbia University Graduate School of Journalism, graduating with a master’s degree in 1975.

At Columbia, he was mentored by famed CBS News executive Fred Friendly, who steered Peter into what would be a long career in television journalism. He returned to Columbia 29 years later to serve as an adjunct associate professor of journalism, where he cherished his time mentoring aspiring journalists for a decade.

After graduate school, Peter began his career in TV news at WPIX-TV in 1975. He is best known for his 16 years at WCBS-TV, where he was a news writer, copy editor, and broadcast news producer, and for his more than 15 years of leadership at NY1, where he served as news director and managing editor. Peter also worked for CBS News and helped launch a 24-hour news channel in London.

Peter held nearly every behind-the-camera editorial job in TV news, winning five Emmy Awards for journalism. He also won the Society of Professional Journalists New York Deadline Club’s Best Series for Investigative Reporting Award in 2001, a tribute from his peers that his wife, Bebe Landis, recalled as one of Peter’s proudest moments. Peter was also particularly proud of his on-the-ground coverage of the South African election of Nelson Mandela in 1994 and a series on immigration with Channel 2 News anchorman Jim Jensen.

Peter also loved Broadway, becoming a Tony Award voter and ensuring detailed coverage of the theater at NY1, as recalled by his colleagues in a tribute they broadcast this week.

“I remember Peter from working side-by-side with him at Channel 2 News,” said Paul Sagan, former news director at WCBS-TV and founding vice president of news at NY1. “He was in the Channel 2 newsroom the first day I walked in for a summer job as a copy boy until I left nearly 15 years later. He taught me as much about covering New York as anyone, but more than that he became a best friend, someone who laughed with you and cried with you, and kept you humble and honest.”

Steve Paulus, former senior vice president at Time Warner Cable and assistant news director at Channel 2, commented, “Having the good fortune to work with someone like Peter for so many years was a rare treat. We shared so many experiences, too numerous to recount. My best memories of Peter are his work as managing editor at NY1. It was the perfect job for him, purely editorial and where his strengths as a journalist and teacher were in full display.”

Former CBS News president Eric Ober, who posted to Facebook, “Peter was a great guy. Very smart, funny, decent and always wonderful to be with personally and professionally.”

Jim Murphy, senior vice president of programming at CNN, recalled in a post, “I was 17 … when I met Peter at WPIX. He taught me how to write copy. He always had me under his wing…. I want (his family) to know how many people far and wide were helped, loved and supported by Peter.”
After retirement, Peter and Bebe moved full-time to Asheville. Former Asheville City Council member and current NC state senator Julie Mayfield wrote that she knew Peter “as a smart, funny, progressive, and vocal resident who wanted the city to be all it could be. He came to City Council meetings, he wrote us emails, he called us when we needed calling. Truly one of our most engaged residents.”
Despite his relatively short time to make an impact on Asheville, the UNC OLLI Observer Newsletter put it poignantly:
Peter had a way of making everyone feel heard, of being willing to confront challenging subjects but also to feel that it was possible at the same time to feel joy. In a conversation with Peter, one never felt rushed. Nothing ever felt trivial. He could dive into a conversation about the complexity of city government or the joy of Taco Billy and Hole Donuts or sous-vide cooking with equal joy and intensity.
One of Peter’s friends wrote, “I’ve spent the past two days reading everyone’s emotional, heartfelt, thoughtfully crafted tributes to Peter Landis. And suddenly I had to chuckle. It occurred to me that if you want to be beautifully eulogized, live life to the fullest and mold a generation of journalists into storytellers.” Perhaps living life to the fullest is the lesson we should all take away.
Peter met his wife Bebe during college in Worcester. They married in 1971 and were to celebrate their 50th anniversary in September.

“I was one lucky sonofabitch,” Bebe remembered.

Over the years, Peter and Bebe moved from an apartment on the Upper West Side of Manhattan, which he swore he would never leave, to the Clinton Hill neighborhood of Brooklyn, restoring a brownstone to its original Victorian splendor. With their son, Alex, born in 1986, the family moved to Montclair, New Jersey in 1988 following a migration of media friends to the suburbs. After retiring, Peter and Bebe relocated to Asheville, North Carolina.

Despite his deep roots in New York, Peter loved to travel. Before moving to Asheville, he and Bebe took a backpack-only, year-long trip around the world. But no matter where he traveled, including to Germany later in life to claim his dual citizenship, Peter never lost his affection for New York. As Bebe recalled, “Peter loved the City to the point that a Manhattan was always his favorite drink.”

In addition to Bebe and Alex, Peter is survived by his daughter-in-law, Sharon Clark, his brother, John Landis, and his brother-in-law, David Picker. Alex and Sharon live in San Francisco, California, with their dog Pork Chop, whom Peter loved.

“I was one lucky sonofabitch,” Alex said, echoing Bebe.

As is characteristic of Peter, and in accordance with his wishes, he continues to impact the lives of others through organ donation.

His family said they intend to arrange memorials for Peter in the Asheville and New York areas later this year, with details forthcoming.

In lieu of flowers, the family is asking that donations be made in Peter’s name to the Committee to Protect Journalists (www.cpj.org).